On Tuesday 31st August, we met at GZ Bachwiesen. During the first 30 minutes, until 20:00, we analysed a game from Saturday that was played in the context of SMM. Patric was playing a strong opponent. He had to defend well for several moves until they reached a same color bishop endgame with a lot of pawns that was drawn.

After the game analysis, we played a Rapid tournament. The time control was 10 min. + 5 sec/move with 4 rounds. We have a shared win among three (!) participants: Georg, Patric, and Albi finished on the first place with three points each.

Some photos from the last round: 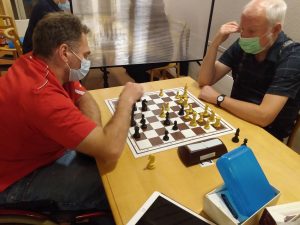